The Alberta Government is conducting a public survey on the draft plan and the Waterton Biosphere Reserve Association (WBRA) would like to encourage everyone to comment on the plan.   The deadline for comment is JULY 15TH, 2016.

There are many aspects to the draft plan which the WBRA is pleased to see, such as:

At the same time, the WBRA would like to suggest the Alberta Government makes compensation for predator kills of livestock a priority in the new plan.

In January 2013, the WBRA, working with producers through its Carnivore Working Group (CWG) submitted recommendations aimed at improving the compensation program to provide a more fair and acceptable level of compensation to livestock producers who share the landscape with large carnivores.

These recommendations were sent to the Alberta Government as two reports: Report 1: Summary of Carnivore Compensation Programs and Report 2: Proposed Amendments to the Alberta Wildlife Predator Compensation Program.  Along with these reports, a letter was also sent requesting the opportunity to discuss how the proposed changes can be implemented on a pilot basis within the municipalities of Ranchland, Willow Creek, Pincher Creek and Cardston. 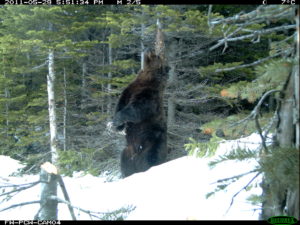 In response to the draft plan, the WBRA has also emphasized to the government the need to incorporate all new data as it becomes available, in particular the recently released results of the BMA 6 study conducted by Dr. Andrea Morehouse and the study currently underway in the south half of BMA 5.

Again, we encourage everyone to share their views on the draft plan and how the plan should be made to work for people and grizzly bears in the long term.  Especially important to review in the plan is the Executive Summary (page xi).  For those interested in specific information relating to BMA 5 and 6 this can be found of pages 22 and 23 of the draft plan.

You may also be interested in information which relates to the draft plan including:
Updated grizzly bear population estimates for southwestern Alberta
(Dr. Andrea Morehouse’s final results from the Southwest Alberta Grizzly Bear Monitoring Project)
The Carnivores and Communities Program
(Includes information on attractant management projects and recommendations to the Carnivore Compensation Program)