Waterton Biosphere Reserve to be featured in television documentary series 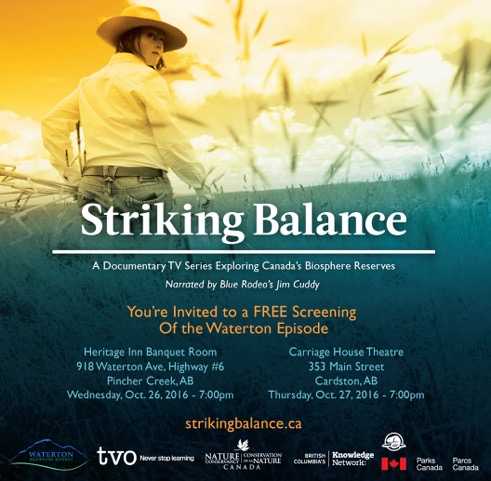 Shot over 170 days, Striking Balance combines aerial and time-lapse photography to create a stunning picture of Canada’s breathtaking Biosphere Reserves. The series includes interviews with over 250 people determined to create sustainable relationships between people and nature.

“The Biosphere Reserve concept was a kind of revelation for me,” says Zach Melnick, Director of Striking Balance. “The idea that people are not outside of nature, but a part of it, ultimately became the focus of the Striking Balance series. We’ve been touring to each Biosphere Reserve from the series, co-hosting public screenings of the episodes to launch the project and invite local communities out to see Striking Balance on the big screen. At Waterton, we were amazed at the sustainable symbiotic relationship between the ranchers and the region’s unique environment, and think you will be too!”

The Waterton Biosphere Reserve, along with the team from Striking Balance are hosting screenings of the Waterton episode on the following dates:

These events are free of charge and everyone is welcome to attend.

Produced in association with The Nature Conservancy of Canada, the Knowledge Network, Parks Canada, and the Canadian Commission for UNESCO, the Striking Balance series is airing this fall on TVO and next spring on the Knowledge Network. Each episode will be available across Canada for a limited time at TVO.org following the first broadcast.

*UPDATE* – January 1, 2017 – for more information on Striking Balance and to order a DVD or Blu-ray of the documentary series please click go to: