WBR Releases Sharing the Range: a film about living with large carnivores

Sharing the Range:
A film about ranch families living with grizzly bears in the Waterton Biosphere Reserve to be released May 8th, 2015.

The southwestern corner of Alberta, Canada, where the Waterton Biosphere Reserve is located, is home to a large number of people involved with agriculture; it is also home to a high population density of bears. With so many people and carnivores sharing the same habitat, there are bound to be conflicts. 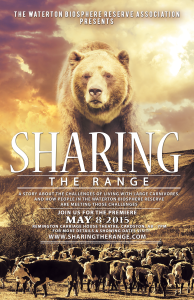 “We have bears in all this country; lots of sows with little cubs. They’ve denned near here – so it’s not just in the mountains and not just on public lands that we are seeing a lot of grizzly bears. It’s on private lands all over the place.” Jeff Bectell, rancher, Waterton Biosphere Reserve Association Chair and Coordinator of the WBR Carnivore Working Group

In response to the community’s need to find solutions for dealing with large carnivores, The Waterton Biosphere Reserve Association (WBRA)  embarked on a multi-solution,  long term project called “Carnivores and Communities”.

The project takes a multi-level approach, including initiatives such as providing on the ground support to help people reduce carnivore attractants on their farms and ranches, proposing changes to the provincial carnivore compensation program, and supporting the monitoring of grizzly bear, black bear and wolf populations in the area.

The previous population estimate for the area was 51 grizzly bears. Current research has identified 177 individual grizzly bears that used and were detected within the study area between 2011 and 2013; with 128 grizzly bears being detected in 2013 alone.  Additionally well over 100 farms and ranches have successfully completed projects on their property to reduce potential conflicts with large carnivores, or have participated in the deadstock removal program.

As the Waterton Biosphere Reserve has worked with the local community and wildlife managers to address the issues of living with large carnivores, the need has arisen to share the story of the farmers and ranchers who directly face the many challenges of living with large carnivores; challenges that impact both their livelihood and the safety of their families.   Despite these challenges, southwestern Alberta families are working hard to solve the problems that arise when animals like bears and wolves share the landscape with people and agriculture. It is important for people who care about large carnivores, and people who care about the landscapes of southwestern Alberta, to recognize the effort spent and costs incurred by farmers and ranchers stewarding these lands.

And so it is that Sharing the Range was produced, offering a glimpse into the lives of farm and ranch families and their struggle to share the land with large carnivores. The farmers and ranchers of the Waterton Biosphere Reserve appreciate the unique landscape in which they live, knowing that their land is prime habitat for wildlife. However, making a living in this environment is not without challenges and wildlife can pose significant concerns for rural families in terms of safety and economics; along with the stress that comes from both worries.

Sharing the Range tells their story:  real people, with real families who work hard to produce healthy food in a sustainable way that allows room for large carnivores to roam.

“I wish we had a better way of communicating with the general public about who we are. Often I think people misunderstand farmers’ and ranchers’ feelings about wildlife.  What I would like people to know is that we enjoy seeing a grizzly bear or big bull elk as much as anyone, but when our livelihood and our families are threatened by wildlife over which we have little control, it can be very upsetting to us. My hope is that Sharing the Range will allow people a glimpse into our lives, and a better understanding of the situation which we are living in here in southwestern Alberta.“ – Tony Bruder, rancher and Area Coordinator for the WBRA Carnivore Working Group

Filmed by award winning filmmaker Leanne Allison, with footage contributed by Jeff Turner, famous cinematographer and wildlife filmmaker; Sharing the Range not only tells an important story of the people in the Waterton Biosphere Reserve, but offers stunning imagery of southwestern Alberta and the grizzlies who call this area home.

The full documentary will premiere May 8th, 2015 at 7pm in the Remington Carriage House Theatre, Cardston, AB.  Everyone is welcome, and we hope you will join us.

View the Sharing the Range trailer and learn more about the film:  www.sharingtherange.com