BOARD OF DIRECTORS AND STAFF

The Waterton Biosphere Reserve Association (WBRA) is managed by a volunteer Board of Directors and part-time contract staff. 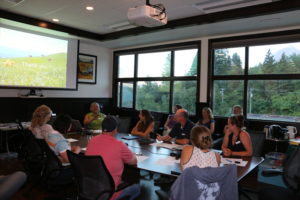 We are fortunate to have such a dedicated group of individuals involved in operating the WBRA. As you will see in their brief biographies below each individual on the WBRA board and staff brings with them unique skills and backgrounds making for a diverse and well-rounded team.

WBRA directors serve a two-year term and are elected during our Annual General Meeting, which is open to the public. If you have an interest in taking on an active volunteer role on our Board of Directors, please contact us.

Board of Directors and Staff

Bill Dolan [Chair]
Bill Dolan joined the WBR in 1990 when he moved to the area as the Chief Park Warden of Waterton Lakes National Park and in 2021 became the Chair of the WBRA. Bill has a keen interest in landscape-level conservation and has been a long-serving member of many ecosystem-level partnerships, including the Crown Managers Partnership and the Miistakis Institute for the Rockies. In 2009, Bill left Parks Canada to work as the Land and Resource Management Coordinator for Alberta Environment and Parks in southern Alberta. Bill is now retired and lives east of Waterton Lakes in the Boundary Creek area with his wife Debbie.

Cam Francis [Vice Chair]
Cam Francis graduated from the University of Lethbridge in 1996 with a Bachelor of Arts in Political Science and Business.  Following University, Cam returned to his grandfather’s ranch in the Glenwood area where he lives and ranches with his wife Nikki and their three children. Cam has been very active in the community over the last number of years serving on a variety of committees and boards including nine years with Cardston County, five of which he was the county reeve.

Julia Palmer [Treasurer]
Julia Palmer is a fourth-generation rancher who lives and works in the Twin Butte area. In 2007 she completed her BA in Religion at Reed College. Following graduation, she began working with her parents on the family ranch. While maintaining a commercial herd of beef cattle, the Palmer family is also committed to pursuing innovative ways of improving the range and riparian health of their land.

Neil Dixon [Secretary]
Neil Dixon is a third generation Albertan. He is retired and is a resident of the MD of Ranchlands. He is a graduate from the University of Oklahoma with a BBA majoring in Petroleum Land Management. Neil was a director of numerous companies, including Ducks Unlimited and Pheasants Forever.

Jeff Bectell [Director and Carnivores and Communities Program Coordinator]
Jeff and his wife Liz, ranch with their children south of Cardston, on land that has always been ‘home’. He was chair of the WBRA from 2010 to 2017. Currently, he is on the WBRA Board of Directors and is also the Coordinator of the Carnivores and Communities Program (CACP). He enjoys working with others in the community to ensure that generations to come can enjoy this area that he loves so much.

Wonnita Andrus [Director]
Wonnita’s fascination with the natural world began in the small ranching community of Bindloss, Alberta where she was born and raised. Her love for the birds, bees, (and even the fleas) spurred her to pursue a diploma in Renewable Resource Management, a bachelor degree in Environmental Science, and a master’s degree of Biology examining habitat fragmentation effects on prairie rattlesnakes. Wonnita is a registered Professional Biologist with over twenty years of fieldwork experience throughout Alberta, Saskatchewan, and Manitoba completing wildlife, vegetation, and wetland inventories and providing mitigation or stewardship options.

Along with participating in various ecological studies, Wonnita has worked as a habitat stewardship coordinator with Operation Grassland Community, a wildlife biologist with TERA Environmental Consultants, and as a natural area manager on the Nature Conservancy of Canada’s Waterton Park Front project. She is now proud to serve as a Park Ecologist for Alberta Environment and Parks out of Pincher Creek.

In her free time Wonnita can be found hugging a tree, or better yet, some fescue.

Jen Jenkins [Director]
Jen is a local rancher with a passion for agriculture, land stewardship, and rural communities. Her family came to the Waterton Park, Alberta area in 1888, where she continues to ranch today. Living so close to a national mountain park like Waterton means she often see’s a variety of wildlife which can be both challenging and rewarding. To Jen, staying involved in the community and working on preserving working landscapes such as those in the Waterton Biosphere Reserve is something she feels to be not only an important responsibility, but also an enjoyable one.

When not working on the ranch, you might see Jen out with her camera enjoying the beautiful landscapes in the area.

Kim Pearson [Parks Canada liaison]
Kim has been a WBRA board member since 2009 and Chair since 2017. A highlight was coordinating a Digital Storytelling workshop in which seven WBR residents recorded unique insights on what makes this a special place. She works as Parks Canada’s Nature Legacy Ecosystem Scientist in Waterton Lakes National Park, coordinating landscape-scale and collaborative programs. Kim spent ten years contributing to the Nature Conservancy of Canada’s Waterton Park Front Project and has also supported organizations such as the Southern Alberta Land Trust Society, Alberta Fish and Wildlife, and Canadian Wildlife Service. She and her family have deep roots in southwestern Alberta and are proud to be contributing residents of the Waterton area.

Andrea Morehouse [Carnivores and Communities Program Science Lead]
Andrea Morehouse is an independent scientist who works on a variety of conservation and management issues related to large carnivores in multi-use landscapes. She moved to Alberta in 2007 and completed both an M.Sc. and Ph.D. in ecology at the University of Alberta. Through her research, she strives to effectively engage scientists, managers, and community members to develop and implement scientifically sound and socially workable wildlife conservation strategies. She was on the board of directors from 2014 to 2021 and began working as the Carnivores and Communities Program Science Lead in 2017. Andrea and her family live west of Pincher Creek and are happy to call southwestern Alberta ‘home’.

Crystal Hiebert [Communications Coordinator]
Crystal has joined the Waterton Biosphere Reserve Association as the Communications Coordinator. Prior to moving to Waterton Lakes National Park in 2018, Crystal was the sole proprietor and head chef of her own dessert business in Edmonton. Since moving to the park, Crystal has deepened her relationship with nature and has grown a strong appreciation for the rich diversity of flora and fauna found here in the Waterton Biosphere Reserve. Crystal became a Certified Nature and Forest Therapy Guide in 2020 and greatly enjoys exploring the area through hiking as well.

Elizabeth Anderson [Conservation Biologist]
Elizabeth is a biological consultant and scientific editor who has joined the WBRA as the Conservation Biologist. She grew up in the Maritimes but settled in Alberta after completing her degree at the University of Alberta. In 2009, Elizabeth and her family moved to Crowsnest Pass to be closer to the family cattle operation near Cowley. Elizabeth has previously contributed her expertise in developing the WBRA’s Species at Risk Action Plan and enjoys seeing conservation in action through on-the-ground stewardship projects.

Cody Spencer [Carnivores and Communities Program Technician]
Cody is a fourth-generation southern Albertan, having grown up on his family’s farm at the base of the Milk River Ridge west of Milk River. After five years of working and learning several trades, he took his conservation ethic and returned to agriculture, working on cattle and bison ranches in southern Alberta before forming Sweetgrass Bison, a bison production and marketing business. He worked within the Oldman Watershed Council’s Watershed Legacy Program from 2015 – 2017 and has recently returned to Alberta from three years of managing a ranch in Texas.

Cody and his wife Julia have a young son and another on the way. They have settled in Pincher Creek. He is passionate about improving the economic, environmental, and social viability of ranching and it’s coexistence with wildlife. Cody is excited to join the Waterton Biosphere Reserve Association team.