Collaboration, Conservation and Co-existence with Wildlife

Waterton Biosphere Reserve recognized for their efforts in southwestern Alberta. 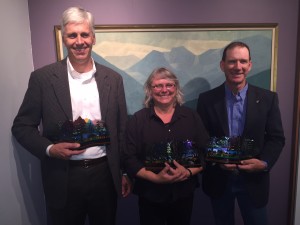 The annual award is granted to an individual or group that collaboratively and effectively contributes to long-term conservation in the Yellowstone to Yukon region.   Also receiving this award for 2015 were two other organizations who work in southern Alberta, the Nature Conservancy of Canada and Southern Alberta Land Trust Society.

“The award recognizes the groups’ collective efforts to conserve this critical habitat, including their collaborative work in helping ranchers and other landowners to peacefully co-exist with wildlife here and throughout southern Alberta.” – Y2Y Updates from the Field

Thank you to the folks at Y2Y for recognizing the people of the Waterton Biosphere Reserve and all of their hard work in programs such as
Carnivores and Communities.