A short update on large carnivore activity in the Waterton Biosphere Carnivores and Communities Program area so far this summer.

The purpose of this update is to keep residents in the Waterton Biosphere Reserve area informed regarding grizzly bear relocations due to conflict incidents through to August 1, 2015. 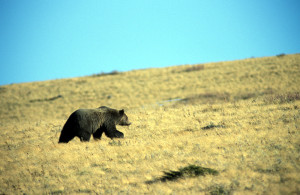 As in past years, there have been a number of bear and wolf sightings, and incidents, since late winter.  In particular there have been ten grizzly bears relocated from within the Cardston, Pincher Creek and Claresholm Fish and Wildlife districts.  Eight of these relocations were the due to livestock depredation by grizzly bears, and two were due to grizzlies persistently remaining in close proximity to homes.  Of the eight bears relocated due to livestock conflict, there were two groups of sows with two cubs each (one set of this year’s cubs and one set of last year’s cubs) that comprised 6 of the 8 bears, the other two relocations involved individual bears. Some of these incidents are in areas that have seen problems in past years and some are occurring further east.  Some of the recent relocations due to livestock depredation occurred north of Glenwood in the M.D. of Willow Creek, and in the Aetna/Kimball area of Cardston County, as well as further east of Cardston on the Milk River Ridge.  Nine of the ten relocated bears were moved to the Nordegg or Grand Prairie regions, with only one nuisance bear being relocated within southern Alberta.  There was also one grizzly mortality due to a motor vehicle collision.

People are encouraged to report sightings and incidents to their local Fish and Wildlife office.  The Waterton Biosphere Reserve Association continues to operate it’s Carnivores and Communities Program, including deadstock pickup, and other on farm projects such as ‘bear proofing’ grain bins, and electric fence projects.  Please contact us if you have questions about this program, or may be interested in doing a project.  We appreciate Alberta Fish and Wildlife (Solicitor General) providing the information for this update.

We plan to share another update later in the fall of 2015, which will cover grizzly bear relocations due to conflict incidents occurring after August 1, 2015.  This information will be shared on the news page of our website, though you may also be interested in signing up for our newsletter so you don’t miss important updates.