Southwestern Alberta continues to have the highest grizzly bear population density in the province.

Results of the Southwest Alberta Grizzly Bear Monitoring Project show that since 2007 there has been a 4% per year increase in the grizzly bear population in Bear Management Area 6.

June 28, 2016, Twin Butte, Alberta – In 2011, Dr. Andrea Morehouse embarked on the Southwest Alberta Grizzly Bear Monitoring Project (GBMP), a collaborative effort between the University of Alberta, Alberta Environment and Parks, and Parks Canada, with the goal of generating an accurate population estimate of grizzly bears in the southwestern corner of Alberta in Bear Management Area 6 (BMA6).  Using non-invasive DNA analysis the project collected hair samples from 899 rub objects during 2011-2014 which were then sent to a lab for testing.

While most folks came to the AGM to hear the grizzly bear population statistics for the area, Dr. Morehouse provided attendees with a great deal of insight about the other aspects of the project.  This included information on learned behavior in bears and how the distribution of grizzly bear incidents in southwestern Alberta has changed over the years. 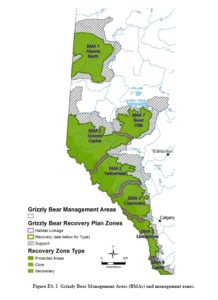 Since 1999 there has been a significant increase in grizzly bear incidents with people or property in southwestern Alberta.  From 1999 through 2014, the majority of grizzly bear incidents in southwestern Alberta (BMA 6 and the southern portion of BMA 5) were related to attractants (55.3%) followed by incidents that involved the killing or injury of livestock (39.5%).  Of the incidents involving attractants, 43% were related to grain storage, 37% were related to deadstock and the remainder involved pet food, garbage, vegetation, silage, bee hives, bird feeders or campsites.

As part of Dr. Morehouse’s research she also evaluated evidence of social learning of conflict behaviours.   Could it be that young bears were learning bad behavior from their parents or even inheriting it genetically? Using genotypes from 2043 grizzly bears from British Columbia, Montana and Alberta, along with Alberta conflict records, Dr. Morehouse was able to identify a link between incidents involving parent bears and their offspring.

“We found some evidence of social learning of conflict behaviours.  Cubs stay with their moms for 2-3 years during which time learning could take place,” said Morehouse.   “For this reason it is particularly important to try and discourage problem behavior from developing in the first place”. 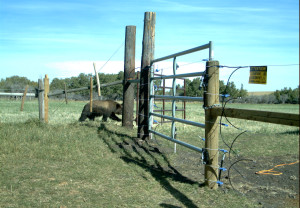 Bear outside of electric at a Carnivores and Communities project.

In an effort to reduce conflict with large carnivores, the Waterton Biosphere Reserve Association implemented the Carnivores and Communities program in 2009, building upon the work already being done by local ranchers.    The Carnivores and Communities program provides support to farmers and ranchers to reduce attractants on their property.   This includes securing grain storage and deadstock removal, two of the main attractants identified in Morehouse’s report.  The WBRA also provides support for electric fencing and has bear resistant garbage bins available to rural residents in the program area.

“We know we can’t totally eliminate conflict with large carnivores, but what we can do is help landowners reduce the risk on their property through these projects”, said Jeff Bectell, WBRA Chair and Co-ordinator of the Carnivores and Communities program who also presented at the WBRA meeting.

The Carnivores and Communities program is primarily funded by the governments of Alberta and Canada but has also been supported by many other organizations.   “We couldn’t do this without the support of the local community.   This has always been a program driven by our farmers and ranchers who all deserve a thank you for not only looking after valuable grizzly bear habitat through good land stewardship, but also for being willing to undertake projects to minimize conflict with these animals,” says Bectell.

While the farmers and ranchers in southwestern Alberta are working to reduce attractants on the landscape, there is one attractant that will be hard to remove without giving up their livelihood and that is livestock.

Dr. Morehouse’s research comes at a critical time as the province of Alberta is currently updating their Grizzly Bear Recovery Plan.  As a part of the draft plan the province has allocated $150 000 to the Waterton Biosphere Reserve Association to continue projects aimed at reducing attractants.

“We appreciate the support that we have received so far.  Most farmers and ranchers appreciate the value of large carnivores on the landscape but the fact is these animals come with a cost, both economically and socially.” – Jeff Bectell.