Why Bats Are Important 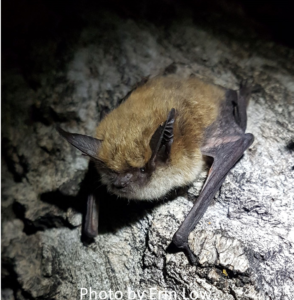 Bats are an important part of the ecosystem in Waterton Biosphere Reserve (WBR). They are the primary consumers of night-time insects, including mosquitoes and agricultural or forest pests: a single individual can consume 100 times its own weight in insects each year. Improving stewardship for bats was identified as a priority in the Species at Risk Action Plan for Waterton Biosphere Reserve. Their continued presence in WBR is important for both the environment and the economy.

Research in Waterton-Glacier International Peace Park found that eight bat species either live in, or migrate through, the region. On the surrounding ranchland and farms, data is scant but studies associated with wind energy development and local knowledge indicate that bats are found throughout the Waterton Biosphere Reserve. Click here for more information about the bat species found in Alberta.

How Bats Are Threatened 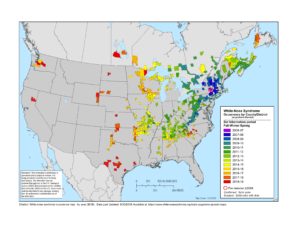 Bats in North America are threatened by white-nose syndrome (WNS), a fungal disease that has killed millions of bats since first noted in the eastern United States in 2006. WNS affects hibernating bats and at some sites, 90 to 100 percent of bats have died. Several species are affected. Three of the hardest hit, little brown myotis (Myotis lucifugus), northern myotis (Myotis septentrionalis) and tri-colored bat (Perimyotis subflavus) were listed as Endangered under Canada’s Species at Risk Act in 2014 due to the advancing threat of WNS. WNS has now spread as far west as Riding Mountain National Park in Manitoba (2019) and was confirmed in Washington State in 2016. Click here to find out more about WNS.

Bats are long-lived mammals with low reproductive output (only 1 pup produced annually over the average 10+ year lifespan for most species), and so are unable to recover quickly from population-level impacts. In addition to the threat of WNS, bat species in WBR are vulnerable to other threats including loss of habitat and stressors such as climate change and wind energy development. Wind energy primarily affects migrating species of bats in the WBR including the hoary bat, silver-haired bat, and eastern red bat (rare but sometimes present). Fatalities are greatest during the late summer and fall migration periods. Specific reasons as to why impacts are not noted in the spring migration as well are unclear but perhaps the bats take a different flight route or elevation. Fatalities occur when bats collide with the spinning turbine blades or suffer barotrauma (injuries due to rapid changes in air pressure near the blades). Wind turbines kill hundreds of thousands of bats annually in North America, and though cumulative numbers have not been published, bat activity and fatalities are typically higher at turbines in southwestern Alberta than at locations further east in the province.

What the WBRA Is Doing To Help

In the face of these population-level challenges, WBR began a project in 2019 to work with local landowners to build resiliency for bats, in particular little brown myotis (or little brown bat). A resilient bat population will be quicker to recover from disturbances like WNS or severe weather through adapting to stresses, better resisting disease, and/or 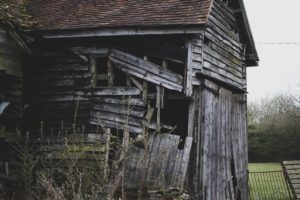 sustaining fewer mortalities. By confirming agricultural buildings that support bat roosting (e.g., barns, shed, granaries), WBR will help landowners decide how best to protect such sites or provide alternate roosting areas if the original structures are damaged or scheduled for removal. Landowners who steward high quality roosting and foraging habitats will support successful rearing of pups and help maximize the health of adults heading into hibernation. Periodic monitoring of roosts can lead to early detection of population changes as well as identification of potential target sites for mitigation measures currently being tested to lessen the impacts of WNS (e.g., inoculation with probiotics/anti-fungal agents, oral vaccines).

In 2020, a Waterton Biosphere Reserve Conservation Technician will help landowners to identify and monitor maternity roosts for bats, specifically by identifying entry and exit points, conducting roost counts, helping determine the particular bat species through bat detectors and guano collection, and discussing ways to maintain or improve habitat for bats on a given property. To correspond with when mother bats have flightless pups in the colony, the survey window will be from June 1 to June 30. Safety for landowners, surveyors, and bats remains our top priority during these uncertain times. Site visits will incorporate the latest Alberta Health Services requirements to minimize the risk of COVID-19 transmission. Our precautionary measures will be discussed with landowners prior to scheduling the technician’s visit (or scheduling for spring 2021 if necessary). The virus causing COVID-19 has not been found in North American bats, and wild bats in either natural or anthropogenic roosts have very little chance of transmitting diseases to humans, unless handled without proper protection. Nonetheless, our work will focus on roost monitoring from a distance and identifying ways to steward bat habitat.

Where To Find Good Bat Habitat 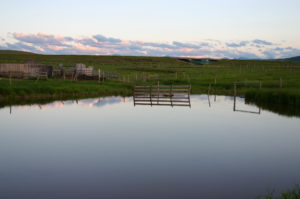 Photo of pond by Robert Anderson

including the little brown myotis, will use natural roosts such as spaces under exfoliating bark, cavities and crevices of standing dead trees or older live trees, cracks and crevices of cliffs, rock bands, and boulders, or erosion cavities of rock or solidified mud. But in addition to adequate roosting sites, bats rely on accessible drinking water and sufficient insects for food. Bats drink by dipping their bottom jaw in water while flying, thus ideal drinking sites will be open, calm waterbodies that are free from thick vegetation or other flight obstacles and that are close to their summer roosts (i.e., less than two kilometres). These waterbodies, as well as streams or rivers, often support the insect populations important to foraging bats. Landowners who implement best practices to maintain healthy riparian areas, avoid drainage of wetlands or ephemeral wet areas, and preserve known/potential natural and man-made roost sites will be protecting habitat for little brown bats as well as several other at-risk insectivorous species.

FOR MORE INFORMATION SEE THESE RESOURCES

from the Alberta Community Bat Program 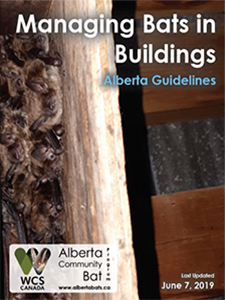 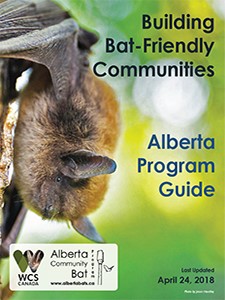 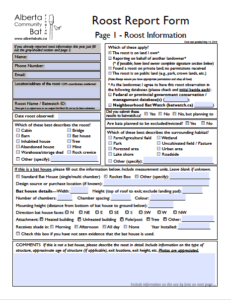