Dramatic and abrupt declines in northern leopard frog populations starting in the late 1970s resulted in extirpation of this species from large portions of its historic range in western North America. This includes much of the Waterton Biosphere Reserve (WBR) where the frog was historically present along major rivers and tributaries, lakes, springs, and irrigation reservoirs.

As part of the Species at Risk Action Plan for Waterton Biosphere Reserve 2015-2018 the WBR embarked on a project in 2017 to support northern leopard frog conservation in the area.

Waterton Lakes National Park is working toward establishing a self-sustaining northern leopard frog population and frogs have been successfully reintroduced to Beauvais Lake Provincial Park and Magrath in recent decades. The WBR’s Northern Leopard Frog Project has raised public awareness on the importance of northern leopard frogs in our ecosystem and provided opportunities for WBR residents to help improve their status in our area.

From 2017-2019, we solicited local knowledge about past and present northern leopard frog occurrences, identified possible locations for habitat improvement or future reintroductions, completed visual and environmental DNA (eDNA) surveys (testing for certain species’ DNA in water samples) at several wetlands on private lands within the WBR, and leveraged interest into opportunities to educate on other amphibian species at risk, associated wetland habitats, and their stewardship in the WBR.

Frogs are important for many reasons: 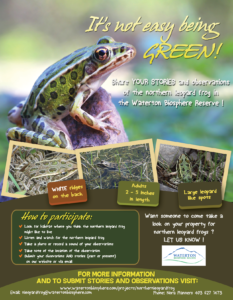 We are now working on a stewardship plan for northern leopard frogs in the WBR. This plan will build on previous landowner outreach activities and site surveys, review best management practices, and compile advice from local and regional experts. Please stay tuned for more information.

The above identification information is adapted from information provided by Alberta Environment and Parks. 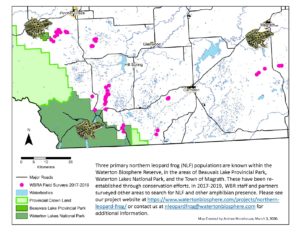 The Waterton Biosphere Reserve Association’s Northern Leopard Frog Project had a successful third season in 2019! Visual surveys and environmental DNA (eDNA) (testing for certain species’ DNA in water samples) were used in search of northern leopard frogs and other amphibians. The focus of the fieldwork was on private lands near Beauvais Lake Provincial Park, Waterton Lakes National Park and Magrath where northern leopard frog re-establishment efforts are in progress or have been successful, and on other areas with historical records. We are happy to report that northern leopard frogs were found at one site not previously documented! This is in addition to the five new sites documented in 2018. Five other amphibians that call the Waterton Biosphere Reserve home were also observed: tiger salamander, long-toed salamander, western toad, striped chorus frog, and Columbia spotted frog.

Thank you to everyone who submitted information on northern leopard frog sightings in the WBR area and to those landowners who allowed us access to your properties. Your support was critical to the success of this project!

We are still interested in information on northern leopard frog sightings in the WBR and welcome you to contact us.

Discover how you can help support a healthy environment for frogs and other amphibians.