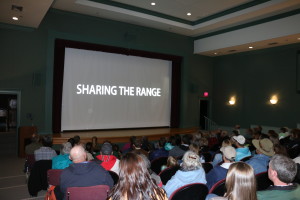 Cardston, AB – May 8th, 2015 – Sharing the Range, a film about the challenges of living with large carnivores premiered in Cardston, Alberta on May 8th.   The short film, just fifteen minutes in length, provides a glimpse into the lives of farmers and ranchers in southwestern Alberta who share their land with a high population density of grizzly bears.

Produced by the Waterton Biosphere Reserve, Sharing the Range provides spectacular images of grizzly bears raising their cubs alongside people and cattle.  It also tells the story of the people that raise the cattle, and their families here.

The film premiered to a full house, a testimony to the number of people who care about the farm and ranch families in the area, along with the grizzly bears who also call this special area home.

In Sharing the Range, local ranchers talk about the concerns they have for the safety of their families and their livestock.   They share examples of the work that farmers and ranchers have done to reduce the risk of conflict with grizzly bears.  Many landowners have carried out attractant management projects and made operational changes to allow for coexistence with bears.  Still, the people in this area are facing significant conflicts with large carnivores.  These conflicts can have a serious impact on their lives, both in terms of safety and economics, along with the stress that comes from both worries.

“In the past week we have lost two calves to grizzly bears, with a third calf badly injured – it might not make it either,” Jen Jenkins, local rancher, told the crowd following the premiere.   Her family respects the wildlife on their ranch, but in the last few years are seeing an increase in losses to bears.   “For most of my life I only remember ever losing a handful of cattle to carnivores, maybe 6 head in 20 plus years.  Since 2013 we have lost 9 head directly to bears, and probably another 10 head due to secondary problems associated with attacks on our cattle.   We do everything we can to protect our livestock and allow the bears space to roam, but the challenges are still there. ” 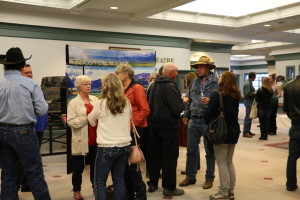 Following the premiere in Cardston, folks gather for some interesting discussion on grizzly bears and the future of ranching in southwestern Alberta.

Sharing the Range tells the story of the important role that farmers and ranchers play in looking after the environment in southwestern Alberta and the hard work involved in sustaining healthy habitat for wildlife, including grizzly bears.  It also makes a call for people to consider the responsibility we all have in managing wildlife and how we can better support the families that are on the land, day to day facing the challenges of living with grizzly bears and other large carnivores.

“We hope that people will recognize the effort being made by landowners to coexist with large carnivores and will provide their support to those efforts” says Jeff Bectell, rancher, Waterton Biosphere Reserve Association Chair and Coordinator of the WBR Carnivore Working Group. “Both financial and political support is needed to continue deadstock pickup and conflict reduction projects, to see producers fairly compensated for livestock killed by predators, and to implement a grizzly bear recovery plan that allows for bear management that is effective not only for grizzly bears but also for the safety and livelihood of farm and ranch families.”

View Sharing the Range and learn more about the film:  www.sharingtherange.com

Waterton Lakes Opera House
Thursday May 21st at 7pm
Following the movie we invite you to stay for music, food and drinks withPetunia and Tin and the Toad