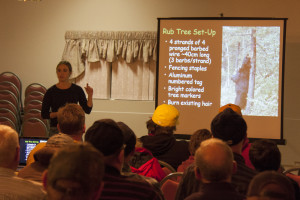 On November 12th and 13th, 2014,  The Waterton Biosphere Reserve Carnivore Working Group held public meetings in Cardston County, the M.D. of Pincher Creek, and the M.D. of Ranchland. With approximately 150 attendees in total, the Carnivore Working Group addressed concerns from area residents and hosted discussion regarding what the future may hold for the management of large carnivores in southwestern Alberta.

One significant finding presented at the meetings is new data which suggests that southwest Alberta’s residents are right; the number of grizzly bears in this neck of the woods is significantly higher than what previous reports suggest.

Since 2011 researcher Andrea Morehouse has been collecting hair samples from bears throughout the southwest corner of the province and sending them away for DNA analysis. In 2013, 128 grizzly bears were detected south of Highway 3. This brings the number of unique grizzly bear profiles identified since the study began to 177. Morehouse’s research comes at a critical time as the Province of Alberta works on a new Grizzly Bear Recovery Plan.

During the community meeting, Paul Frame, Provincial Carnivore Specialist with Alberta Environment and Sustainable Resource Development presented an overview of the provinces updated approach to grizzly management which may take into account population density and local sensitivity.

The new Grizzly Bear Recovery Plan is expected to be open for public comment in early 2015.

Also attending the meetings were Alberta Fish and Wildlife officers who presented facts regarding the number and type of incidents involving large carnivores in southwestern Alberta.

The Carnivore Working Group continues to work on reducing large carnivore attractants which can have an impact on both the livelihood of farmers and ranchers and the personal safety of all residents.

“Farms and ranches provide food for people and also habitat for wildlife; including large carnivores. We can help producers make changes so that when large carnivores show up on private property there is less likelihood of conflict. That said, there will still need to be management options for dealing with problem bears, wolves and cougars,” says Jeff Bectell, local rancher and current chair of the Waterton Biosphere Reserve Association.

The Carnivore Working Group has recently proposed a number of changes to the livestock compensation program which they expect to hear back on by the spring of 2015. The group hopes these proposed changes will be an improvement on the current system and better suit the needs of livestock producers.

Updates relating to the Carnivore Working Group and the Grizzly Bear Recovery plan will be posted on our website as they become available.