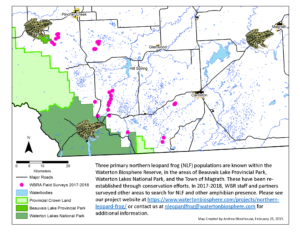 The WBR Northern Leopard Frog Project aims to create public awareness on the importance of northern leopard frogs in our ecosystem and to create opportunities for WBR residents to help improve their status in our area.

Visual surveys and environmental DNA (eDNA) (testing for certain species’ DNA in water samples) were used in search of northern leopard frogs and other amphibians. The focus of the field work was on private lands near Beauvais Lake Provincial Park and Waterton Lakes National Park where northern leopard frog re-establishment efforts are in progress or have been successful, and on other areas with historical records. We are happy to report that northern leopard frogs were found at five sites not previously documented!  Five other amphibians that call the Waterton Biosphere Reserve home were also observed: tiger salamander, long-toed salamander, western toad, striped chorus frog, and Columbia spotted frog.

Thank you to everyone who submitted information on northern leopard frog sightings in the WBR area and to those landowners who allowed us access to your properties.  Your support was critical to the success of this project !

We are still welcoming information on northern leopard frog sightings in the WBR and welcome you to contact us.